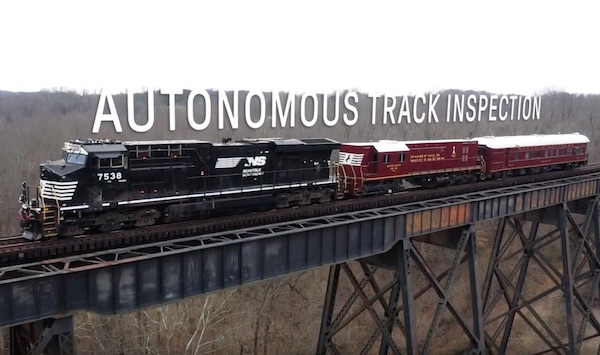 Norfolk Southern (NYSE: NSC) today announced that it has achieved a breakthrough in track inspection technology that will enhance railroad safety and operating efficiencies.

Combining ingenuity and innovation, the company is the first North American freight railroad to develop and deploy an autonomous track geometry measurement system that is mounted on a locomotive. In contrast, autonomous track-inspection systems commercially available today are installed on converted freight or passenger rail cars, which require an external power source to operate and occupy space on a train that could be used to move revenue-producing freight.

"With our locomotive-based system, we use an existing asset to increase the frequency of our track inspections, without adding another piece of equipment that has to be run across the railroad," said Ed Boyle, vice president engineering. "This innovative approach enhances our safety practices by permitting us to have precise and quality track inspections done under load at track speed. With this system, Norfolk Southern will provide service safely, efficiently, and cost-effectively."

Norfolk Southern's track inspection group, part of the Engineering Department, developed this mold-breaking system. It provides a more robust and cost-effective way to continuously monitor track performance in near real-time. The system is mounted in a ruggedized box under a six-axle road locomotive between the snow plow and the first set of wheels. A computer that powers the system is housed inside the electrical locker in the locomotive cab.

As part of a pilot, Norfolk Southern is operating the autonomous system on a mainline between Norfolk, Virginia, and Portsmouth, Ohio. The route offers a comprehensive range of track and operating conditions, including straight and curved track, hilly terrain, and high-tonnage loads.

"With this innovative system, any time this locomotive is moving and pulling freight, it is testing track at the same time," said Mike Allran, manager track inspection and development, who helped lead the initiative. "This gives us more robust data for use in predictive-modeling to determine track maintenance intervals, which enables us to maximize efficiencies that will generate significant cost savings."

Norfolk Southern turned to defense industry firms to find commercially available components to build the system, which consists of lasers, gyros, accelerometers, and global positioning system sensors. The system can detect defects or anomalies in track geometry, including track gauge, or the distance between rails, and the elevation and curvature of track. The system transmits inspection data wirelessly to office locations, where track geometry engineers confirm potential defects and notify track maintenance personnel.

The autonomous inspection system will supplement testing done by the company's existing fleet of manned track geometry cars and hi-rail trucks. Norfolk Southern plans to equip additional locomotives with the system and potentially upgrade its capabilities, including adding an optical system to evaluate track components such as fasteners, rail welds, and switch points.

"Our team is committed to helping Norfolk Southern achieve industry leadership in the use of advanced technologies to enhance safety, increase operating efficiencies, and better serve our customers," Allran said. "The development and deployment of our autonomous track-inspection system is one more way we are making progress toward that goal, generating benefits for us and all our stakeholders."

Norfolk Southern Corporation (NYSE: NSC) is one of the nation's premier transportation companies. Its Norfolk Southern Railway Company subsidiary operates approximately 19,500 route miles in 22 states and the District of Columbia, serves every major container port in the eastern United States, and provides efficient connections to other rail carriers. Norfolk Southern is a major transporter of industrial products, including chemicals, agriculture, and metals and construction materials. In addition, the railroad operates the most extensive intermodal network in the East and is a principal carrier of coal, automobiles, and automotive parts.