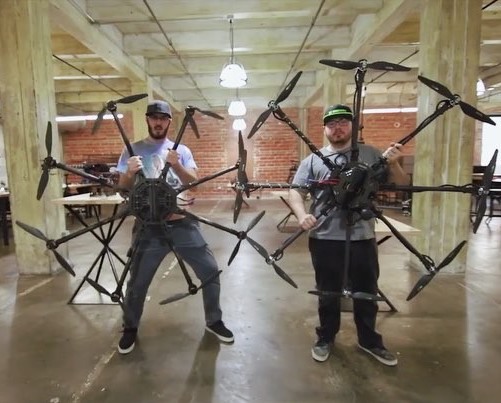 Walk into the offices of Houston’s DroneWorks Studios in a renovated warehouse north of downtown, and the first thing that catches your eye is Janet. That’s the name given to a massive, 165-pound, 16-rotor drone mounted on a wall, wrapped in multicolor LED lights, nearly reaching from floor to ceiling. Janet could be taken down from its mount and flown, but don’t count on that ever happening.

Janet was used just once, for a project with a budget approaching $3 million. And it likely will never be used again.

That’s how things go at DroneWorks Studios, considered one of the highest-profile boutique shops specializing in custom, unmanned vehicles used in everything from industrial inspection to cinematography. Complex drones are built once, never to be used again, for clients who expect exclusive treatment.

What began as a hobby for co-founders Justin Oakes and his wife, Elaine Lozano, has grown into a business that takes them all over the world to work for big clients, many of whom are household names.

"He has been designing and building radio-controlled aircraft and cars since he was a kid," Lozano said. "He was building them for fun, and he was working in investment banking in the energy industry, so he had nice funding for his expensive hobby. But I complained about it, and said if you are going to spend this much time, turn it into a business."

Read the full article at Chron.com.