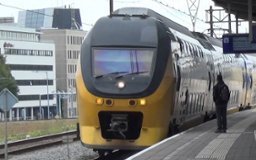 At the Dutch Railways, we are collecting 10s of billions sensor measurements coming from the train fleet and railroad every year. We use these data to conduct predictive maintenance, such as predicting failure of the train axle bearings and detecting air leakage in the train braking pipes. This is extremely useful, as these failures are notoriously difficult to detect during regular maintenance, while occurring frequently and causing severe delays, damage to material and reputy, and costs.

In this talk, we present how we use the compressor logs in order to detect the occurrence of air leakage in the train braking pipes. Compressor run- and idle- times are extracted from the logs and modelled by a logistic regressor for discriminating between the two classes in normal operational mode. Air leakage will cause the idle times to become shorter as air pressure needs to be leveled more frequently, which can be detected with the logistic model.

With a density-based clustering technique, a sequence of such events can be identified, while ignoring outliers due to circumstantial phenomena such as power outage. These clusters are associated to levels of severity, based on which a trend analysis can unlock the expected number of days the compressor will still function before breaking down.

This method has been developed by Wan-Jui Lee of the Dutch Railways and published as "Anomaly Detection and Severity Prediction of Air Leakage in Train Braking Pipes" in the International Journal of Prognostics and Health Management in 2017. We have implemented the methods as described in the paper using Python and Spark in a production environment.

About Ivo Everts Ivo Everts holds a PhD on image processing and machine learning and loves programming in Python, C++, Java, Matlab and R. After completing his research, Ivo joined GoDataDriven to apply his skills and solve real problems for industrial and corporate clients. As such, he helped ING (bank) and NS (train fleet) develop production-ready data products and grow their team of data scientists. Now, he is involved in developing Medicx.ai, with the mission to become the goto AI partner in healthcare. Ivo is a frequent contributor to various international conferences and journals such as PyData, Spark Summit, ECCV, CVPR, NCCV, ICPR, TIP & Goto Conference.