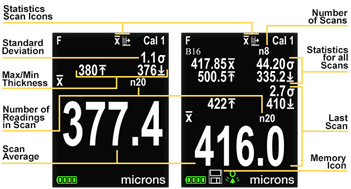 According to SSPC: The Society for Protective Coatings, Paint Application Standard No. 2 (SSPC-PA 2), Procedure for Determining Conformance to Dry Coating Thickness Requirements, is one of the most frequently downloaded standards from the SSPC Marketplace. Measuring coating thickness is one of the most commonly specified quality control processes, and SSPC-PA 2 is recognized across the globe as the standard for frequency and acceptability of coating thickness measurements. SSPC-PA 2 was first published as a temporary standard in 1973 and has undergone many revisions over the years.

While the body of the standard is reasonably well recognized, there are several nonmandatory appendices that provide guidance on several unique measurement issues that may be a little less known. Although they are not mandatory as part of the standard, they can be made mandatory by invoking them in the contract documents (specification). The appendices include:

This article focuses on Appendix 10, Procedure for Obtaining a Greater Population of Thickness Measurements Using Type 2 Gage Continuous Read/ Scanning Probe Technology that was added to SSPC-PA 2 in November 2018.

Research conducted in 2016 by Vision Point Systems, Inc. in conjunction with the US Naval Research Laboratory[1] demonstrated that greater precision of DFT measurements can be obtained using a scanning probe method over the traditional "place and remove" probe method. The research also indicated that the increase in precision of rapid scanning DFT measurements over the traditional measurement frequencies described in PA 2 can be substantial. Rapid DFT scanning technology enables an operator to collect a larger number of measurements in a shorter time frame than the traditional method. As a result of the increased number of measurements collected, better estimates of the sample mean can be obtained through increased precision. The research lead to three recommendations to the SSPC Dry Film Thickness Committee in 2017...