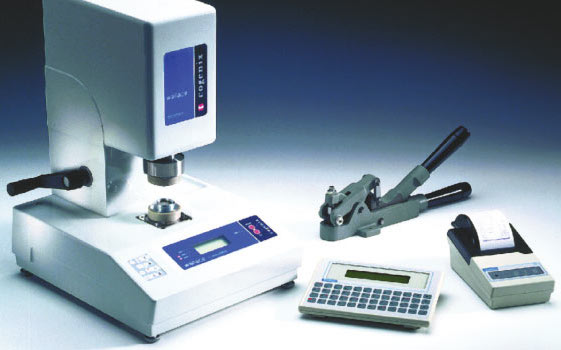 Hardness measurement is a way to practically determine the degree of vulcanization of a rubber sample. One of the most important and commonly used measurements for non-destructive hardness testing is the IRHD (International Rubber Hardness Degree).

International testing standards specify a primary load of 5 seconds and then a secondary load of 30 seconds. H W Wallace has developed a predictive technique which allows these times to be reduced significantly.

Using a Wallace Cogenix Micro Hardness Tester, a program of research was undertaken on different rubber types (and thicknesses) at a variety of temperatures.

These tests were conducted to determine the relationship between indentation (IRHD) and time. A general equation was derived which meant that the 30-second hardness value could be calculated after a few seconds of the application of the "secondary" load. The effects of the "primary" load time were also examined.

The predictive technique has been incorporated into the newly launched Data Collection Software, giving an accurate, rapid prediction of the standard results, with a high level of confidence.

Hardness measurement has been in existence since the early 1900s and is one of the most commonly used methods of product and quality control. The standard, non-destructive, IRHD (International Rubber Hardness Degree) method (such as ISO 48:19941), holds the sample in place using an annular foot. A spherically tipped indentor is then applied for 5 seconds under a constant "primary" load. A "secondary" load is then applied for another 30 seconds to give the indentor an incremental displacement. This is measured and then scale-converted to an IRHD reading.

The "secondary" load period was originally set at 60 seconds. However, it was felt that, especially when testing large numbers of samples, a reduction in this time would be preferable. Gurney2, and later Dock3, investigated the influence of the period of application of the load and, as a result of this work, the 30 second time was widely adopted.

It was noticed that a skilled operator could ‘predict’ the hardness of a sample much earlier in the measurement cycle. For this to be the case, there has to be a common family of hardness curves for a majority of sample types and ambient measurement conditions. This would mean that a general equation could be derived and this would in turn lead to a specific, predictable curve for any specified measurement. The curve could then be used to predict the 30-second value much earlier in the measurement cycle.

The standard specifies ambient temperatures to be 23 ± 2 °C. However, these conditions are not always observed in practice and so the effects of temperature on the prediction accuracy were also studied.

Read the full article at Azom.com.