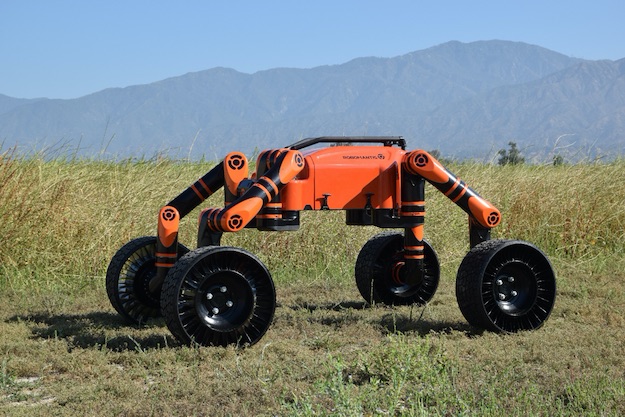 Motiv’s RoboMantis is a modular robotic system that has four limbs and up to two manipulators. It is capable of quadrupedal walking mobility as well as wheeled motion. The integration of Actin on the RoboMantis platform enables a coordinated control of the full RoboMantis and hence take advantage of the hardware’s control and payload capabilities. Actin’s constraint-based kinematics allows simplifying the programming of the RoboMantis, which can have upwards of 38 degrees of freedom.

The software architecture is based on Actin’s Robot Control Framework (RCF), and robot programming is done using Energid’s motion scripting interface EcScript. Actin’s RCF architecture provides core modules for real-time robotic system controller development. It allows developers to add custom transfer layers for interprocess communication and integration with the hardware. RCF’s state machine architecture enables a complex application logic necessary for high performance and safety of the robot hardware. The RoboMantis has two transfer layers for communicating with hardware and ROS. The hardware control is based on EtherCAT, and the robot programming is enabled through EcScript service provided by the ROS transfer layer.

The tracking demonstration in the video uses an onboard camera and GPU to publish tracking data to Actin through the ROS Transfer layer. The front-end UI is based on RViz, which sends the robot programs to Actin for controlling the hardware and in return gets the robot state. The EcScript program uses motion constraints relative to the system frame, which enable the full-body manipulation to move to the tracked object detected by the stereo camera.

The last barrier is to prove to decision-makers (and the general public) that these autonomous systems are safe. This paper describes a rigorous safety testing environment for large autonomous vehicles. Our approach to this borrows elements from game theory, where multiple competing players each attempt to maximize their payout. With this construct, we can model an environment that has an agent that seeks poor performance in an effort to find the rare corner cases that can lead to automation failure.