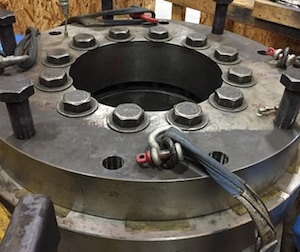 Prior to 2015 no reliable non-destructive test method existed for measuring the collapse pressure of deepwater pipeline joints, which are typically around 12 m (39.3 ft) long. Historically, the industry has favored testing a few specimen joints to destruction, then combining the results with the best available structural design techniques and a substantial safety factor to determine a conservatively safe pipe wall thickness. This approach on several projects led in turn to creation of the best-known design code for deep water pipelines, DNVGL-OS-F101.

There are, however, two major drawbacks to this approach. One is the huge cost arising from committing to a large safety factor due to the lack of measured strength data. The other is that the ultimate collapse strength of a group of manufactured pipeline joints varies considerably from joint to joint, even though they are notionally identical. Numerous features of the manufacturing process and materials affect the collapse depth; if the entire design methodology is reliant on destructive tests of just a small sample of pipes, these could, it should be noted, include a rogue pipe with a collapse strength even lower than that permitted by the safety factor.

Ring Testing, a patented method developed by Verderg Pipeline Technology, provides a direct, reliable, non-destructive measurement of a deepwater pipeline joint’s ultimate collapse depth by testing the collapse strength of a short ring cut from the ends of a significant number of sample pipes, leaving them still within tolerance for project deployment.