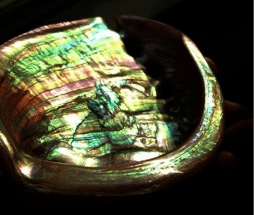 Most people know mother-of-pearl, an iridescent biomineral also called nacre, from buttons, jewelry, instrument inlays and other decorative flourishes. Scientists, too, have admired and marveled at nacre for decades, not only for its beauty and optical properties but because of its exceptional toughness.

"It’s one of the most-studied natural biominerals," says Pupa Gilbert, a University of Wisconsin–Madison physics professor who has studied nacre for more than a decade. "It may not look like much — just a shiny, decorative material. But it can be 3,000 times more resistant to fracture than aragonite, the mineral from which it’s made. It has piqued the interest of materials scientists because making materials better than the sum of their parts is extremely attractive."

Read the full article at University of Wisconsin.

Image: Nacre, or mother-of-pearl, found in red abalone and other mollusks, is extremely fracture-resistant. That’s one reason researchers are interested in the natural material, and why UW–Madison scientists wanted to find a method to measure its thickness without harming the nacre. COURTESY OF KATS LAB / UW–MADISON