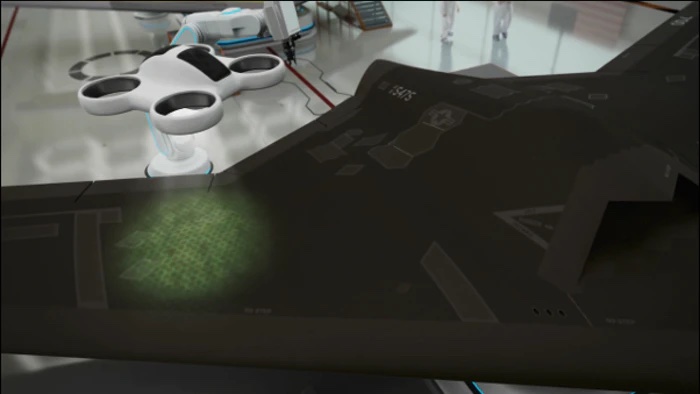 The F-35 Lightning II is an all-weather stealth combat aircraft that is intended to perform warfare strike missions and electronic surveillance capabilities at speeds up to 1.6 Mach.

Composites comprise 35% of the airframe weight, with the majority being bismaleimide, as well as some carbon nanotube-reinforced epoxy, which has a tensile strength of approximately 100 times greater than steel.

Any deviations in external dimensions can interfere with stealth capabilities, and at supersonic speeds, prove catastrophic to both plane and pilot.

Therefore, it is critical that the "as built" metrology is confirmed as "near perfect" to the design. Currently, inspection is done by hand at Lockheed Martin’s production facility in Fort Worth, Texas.

Gantries are assembled above the craft and workers use handheld scanners extended at arm’s length. This manual process introduces variables and also puts workers at risk as they attempt to straddle the smooth contoured surfaces of the aircraft.

Read the full article at Manufacturing.net.

CAD/CAM Services mission was to deliver to Lockheed Martin a drone-mounted scanner that can accurately (± 0.025mm) measure large assemblies, and transmit that data to a system that ultimately creates CAD files for first article inspection or maintenance purposes. Credit CAD/CAM Services