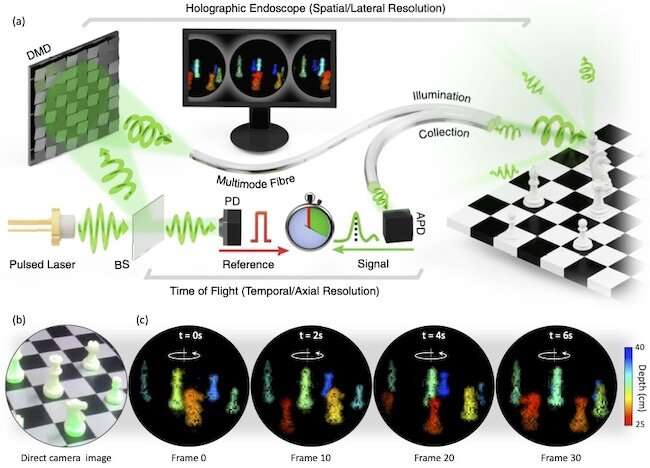 A new imaging technique, allowing 3D imaging at video rates through a fiber the width of a human hair, could transform imaging for a wide range of applications in industrial inspection and environmental monitoring. In the longer term the technique could be further developed for applications in medical imaging.

The system was developed by an international team of scientists led by the University of Glasgow's Optics Group. In a new paper published today in the journal Science, the team describe how they have been able to create video images from a single multimode optical fiber using a process known as time-of-flight 3D imaging.

Professor Miles Padgett, Royal Society research professor at the University of Glasgow and principal investigator for QuantIC, the UK Hub for Quantum Enhanced Imaging, said: "In applications like endoscopy and boroscopy imaging is traditionally achieved by using a bundle of optical fibers, one fiber for every pixel in the image, resulting in devices the thickness of a finger.

Read the full article at Physics.org.