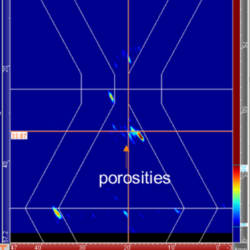 Phase Coherence Imaging, or PCI, is a technique proposed in 2009 to improve resolution and contrast in ultrasonic testing images. It is based on evaluating the coherence between the signals detected by all the elements of phased array ultrasonic testing probe. The intensity of a PCI image depends on the nature of the indications. Omnidirectional sources such as porosities, tip diffractions, and slags tend to display high intensity as a lot of emitter-receiver pairs of the Full Matrix Capture (FMC) see them with roughly the same phase.

Reflectors whose phase has a strong directional dependence such as front surface, backwall, delaminations, Lack of Fusion (LOF), etc. produce low-value PCI. PCI facilitates the detection of volumetric defects (porosities and slag) and the identification of crack tip diffracted signals for better sizing. This article takes a closer look at the pros and cons of phase coherence imaging for defect detection and analysis.

How to calculate a PCI image

Here we’ll explain how to calculate a Total Focusing Method (TFM) image first. The FMC/TFM is an inspection technique that involves two steps. The first is the data acquisition process called FMC, and the second is data reconstruction: TFM. The whole process is typically done in real time on most hardware, so the two steps are transparent to users.

The FMC is a matrix consisting of the combination of N transmitted signals and N received signals with each matrix cell containing an A-scan time domain signal. It is obtained by firing the N elements of the Phased Array Ultrasonic Testing (PAUT) probe one by one and recording on all receivers each time.

The TFM algorithm consists of coherently summing amplitudes from the signals of the FMC dataset to focus at every pixel of a Region of Interest (ROI). Mathematically, this can be expressed as...

Read the full article at Eddyfi.com.